Going to the cinema has been a favourite pastime since silent film premiered in front of an audience in 1895. The production was a Lumière brothers enterprise in Paris, and was the first to present moving pictures to a paying audience.

Now cinema is ruled by the multiplex, and the days of intervals and flickering projectors are long over save for a few historical mementos tucked away in bohemian backstreets. But Wigan was once home to an eclectic bunch of picture houses – many of which have since been demolished. So dust off the lyrics to the ABC Minors song and look back on the glory days of film when it came to town in true Lancashire fashion.

Wigan’s first ever cinema didn’t start as a cinema at all. The Pavilion, which stood next to Wigan Technical and Miners’ College (now the Town Hall), originally opened around 1908 as the Coliseum Skating Rink which could host up to 5,000 roller skaters at a time. In 1910 the rollerskating industry had declined, so much so that the building was converted into a cinema complete with a Jardin organ for playing music along with silent films. In its heyday, the Pavilion could fit 5,000 people sitting and a further 2,000 standing.

1930 saw a Western Electric sound system installed in the theatre, the organ removed, and the seating reduced to 2,000 people. It remained open until 1957 when it was demolished to make way for the Wigan International Swimming Pool – now Wigan Life Centre.

Dating back to 1911, the Kings Electric Theatre was Wigan’s first ever purpose-built cinema. Along with movie screenings, the cinema would host live acts and energetic musical performances from the Kings London Orchestra. Based in Clarence Yard in Wigan Wallgate, the cinema had one screen and could hold 600 people.

The cinema was leased to three different companies in its lifetime – United Electric Theatres Ltd., Elite Theatre Wigan Ltd., and The Princes Cinema Ltd., under whom the name was officially changed to New Princes Cinema. New Princes became the first cinema in Wigan to show a talkie film in 1929 – the film was Show Boat featuring Laura La Plante.

New Princes Cinema began its rapid decline in 1932, when rumours about vermin infestation swamped the local press. A monetary reward was offered for anyone who knew the instigator of these rumours, but in 1933 the theatre was leased by Falcon Pictures and subsequently demolished.

The next incarnation of the Princes Cinema (affectionately dubbed a ‘flea pit’ by many Wiganers) appeared close nearby. The impressive building could seat over 1,100 people and was renovated in 1939 to install heating and television reception, continuing to host live acts. New Princes ceased to be a picture house in 1970 with a final showing of The Mad Room. The building still stands and is in use as Pure Nightclub. 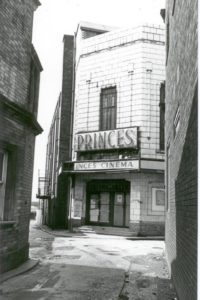 Built in 1916 by Eagle Picturedomes, the Queens Cinema in Pemberton could seat up to 888 people by 1953, after undergoing a huge refurbishment in 1937. In 1955 the cinema was fitted with CinemaScope technology – an anamorphic lens for projecting widescreen movies.

The Queens remained open until 1964, standing empty until its conversion into a squash club in 1979 before it was taken over by retail units.

Meanwhile, located down Ormskirk Road, Unit Four cinema began its life as the Royal Electric Theatre in 1912. Unit Four was known by many names including the Halfway House Cinema and the Carlton before being renamed Unit Four in 1980 under the banner of the Apollo Leisure Group. In the 1960s the building existed briefly as the Carlton Club before reverting back to a cinema in the early 1970s. The cinema had three screens and in its heyday as the Carlton Cinema could seat 689 people.

Unit Four closed in 1997 and reopened as a carpet shop.

Up Holland was once home to its own – albeit short-lived – cinema. Not much is known about the Old Lyric cinema, only that it was owned by the Dickinson brothers and closed down in June 1957 after a showing of Charley Moon. The building was then used by the parish council as a community centre, hosting parties for children, dances and church functions.

Much confusion surrounds the County Playhouse’s construction. The date embossed on the front of the building reads as 1916, but the build wasn’t actually completed until 1919 due to resource shortages lingering from WWI.
The 1,070 seater cinema eventually opened in December that year with a showing of The Peril Within. It was equipped with a Christie organ in 1930, which attracted many famous organists over the years. The cinema was also renowned for including an adapted Ardente sound system to allow hard of hearing people to listen to talkies through earphones.

MGM’s first ever 3D film was shown at the Playhouse in 1938 – Audioscopiks, directed by Jacob F. Leventhal and John A. Norling was a short film created to show off the abilities of 3D technology, using the red-green anaglyph process. The audience at the time were taught about how 3D movies were being made, instructed to put on their 3D glasses and given a full demonstration of the wonders of three-dimensional film with objects like a baseball flying towards the camera. The film had two sequels, The New Audioscopiks that same year, and Third Dimensional Murder in 1941.

That wasn’t the last time 3D came to The County Playhouse – 1953’s Stereoscopic release of House of Wax saw St. John’s Ambulance turn up at the back of the cinema in case of mass fainting!

By 1940 the County Playhouse was hosting regular musical interludes before film showings, with help from the Wigan Recorded Music Society. It didn’t prove as popular as the organ music, however, and was soon scrapped.
The cinema was ravaged by fire in 1949 and almost completely destroyed, but reparation work carried out by Eagle Picturedomes saved it, and the Playhouse went on to feature widescreen films from 1954. It finally closed in 1966.

Probably the best known and longest lived cinema in Wigan was the Ritz Super Cinema. The cinema on Station Road opened to the public in 1938 with a showing of Lost Horizon starring Ronald Colman. It could seat up to 2,560 patrons and was installed with a Western Electric Mirrophonic sound system, which produced ‘a beauty of sound and astounding clarity along with a wonderful illusion of reality’ as quoted in the Observer.

The Ritz building also contained a café and theatre facilities, where the likes of George Formby, Buddy Holly and The Beatles performed live on-stage. Wigan’s Operatic Society also used the building to put on musicals between 1956 and 1964.

Change came to the Ritz in 1977, when the building was transformed into a three-screen cinema under the banner of EMI, and renamed the ABC Film Centre. The former stage area became a bingo hall, and the café was no longer. The ABC takeover did see the introduction of a local ABC Minors club – every Saturday morning the cinema was filled with the bars of the group song before a showing of the latest movies for children.

The Ritz eventually closed its doors in May 1998, after the opening of a nearby multiplex. The building was deemed too costly to repair and too dangerous to continue operating, and was demolished in 2005.

Orrell’s Majestic picture-house existed on Sefton Road, and will likely inspire memories of Disney cartoons like 101 Dalmatians, the Buster Crabbe Tarzan the Fearless serials of the 30s and 40s, and later Beatles flicks like Help. Members of WiganWorld fondly recall heading to Horrocks across the road for a sarsaparilla after the showing!

Majestic closed for business as a cinema around 1966, reopening as a supermarket and later a bingo hall. It existed as Majestic Windows until around 2000, when the building was demolished.

Images are taken from WiganWorld.