St. Helens is full of hidden gems: picturesque nature reserves, impressive factories and awe-inspiring historic buildings. Set back in expansive grounds or hidden by trees, many of these buildings are easily missed by the untrained eye, and that’s only the ones that have managed to evade demolition.

Perhaps an even unluckier fate is for the years to pass without intervention and the sites to fall into disrepair, as with Winstanley Hall in Wigan and St. Joseph’s Seminary in Up Holland. The years have been slightly kinder to Rainford Hall, Fairfield House and Birchley Hall – all located within 4 miles of each other – as they’ve all been redeveloped into usable, modern spaces. But what of their heritage?

On Birchley Road in Billinge you’ll find Birchley Hall Care Home, operated under the banner of Qualia Care. But the Grade-II* listed building has an illustrious history spanning centuries; first built around 1594 (though a house did exist on the site since 1202), Birchley Hall had an essential part to play during the Reformation of the sixteenth and seventeenth centuries.

Christopher Anderton purchased the land for the Birchley Hall estate from Roger Wetherelt in 1558, during the rule of Queen Elizabeth I. Christopher died in 1593, and was succeeded by his son James, who followed in his father’s footsteps to become a lawyer. It was James who built the current Birchley Hall and set up an illegal Catholic printing press out of it during the persecution; as a Catholic stronghold during the reigns of Henry VIII and Elizabeth I, St. Helens in Lancashire was the ideal place for such a press to be established in 1604.

Birchley Hall Press, including James Anderton and his cousin Lawrence, produced around 25 titles including ‘One God; One Faith’, ‘The Christian Manna’ and ‘The Non-Entitie of Protestancy.’ Most were published under the pseudonym John Brerely to protect the Andertons from persecution, though the press was eventually discovered by a spy in 1613 and all the books seized.

Birchley Hall was also home to a secret chapel; erected around 1618 – perhaps just before James’ death later that year – the chapel was built above one of the wings of the hall. A trap door was installed in the floor for priests to escape if necessary, while another concealed opening led out to the roof. It was here that a watcher would be stationed to alert chapel attendees to anyone approaching. In the 1940s, a pewter chalice, vestments and a few altar-stones were discovered in Birchley Hall, which would have been carried by priests. During the Reformation, celebrating Mass was punishable by death, so any Catholic priests who continued to preach took a great risk in doing so. 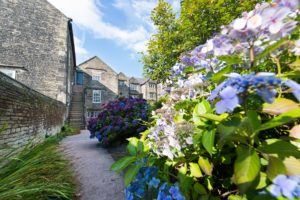 Rumours have circulated of a hidden tunnel from Birchley Hall to Crank Caverns, for priests to escape out into the open, but these have not been confirmed.

The Gerard family eventually acquired Birchley Hall in the 19th century, letting it to a series of tenants, before it was sold to John Middlehurst in 1898. In 1944 it was sold again to Vincent Wood, a relative of the Middlehursts, who lived there until the hall became a Sue Ryder care home in 1975.

In 1951 the Birchley Hall Press was resurrected, operating in the same building as the original, more rudimentary press. Vincent Wood took care of the actual printing through his company Wood Westworth & Co. Ltd., based in St. Helens. It published a few titles including ‘Liverpool’s Hidden Story’ and ‘This is the Faith’, until around 1960, and now exists as a publisher of online magazines in Hampshire.

Located on Crank Road, close to Fairfield Hospital, Rainford Hall was developed into office spaces in the eighties. The hall was first built back in 1782, purchased by Colonel Richard Pilkington from its previous owner Dr Alexander McKibbin in 1875. Pilkington was the first to redevelop the hall into a building better befitting the 19th century, adding various farms and houses either side of the main building.

In the midst of WWII in 1943, the Hall was requisitioned by the War Department for use in the war effort, and afterwards became a children’s home and a student hostel before its conversion into office space.

Not so lucky was the nearby Muncaster Hall, a uniquely Victorian building located at the top of Muncaster Drive in Rainford. The hall was first home to Richard Pennington in 1857; the heir to a wealthy cotton mill in Hindley, Pennington and wife Elizabeth took over several farms and houses in Rainford. Later, the Hall and its associated properties, which totalled 315 acres, were sold to the Earl of Derby for £37,000.

Muncaster Hall was later leased to the Pilkington family, and purchased in 1940 by Richard Heyes for agricultural purposes. It was eventually demolished in the 1950s, just 100 years after its erection.

Now known as Fairfield Independent Hospital, Fairfield House began its life as yet another Pilkington family home. Old maps show Rainford Hall as the main property on the some 1,600 acres of land it occupied, with a building named Crank Hall slightly north and Fairfield House off to the west. Crank Hall ended up as a Macmillan Hospice before it was eventually demolished towards the end of the 20th century, but Fairfield House lived on.

It was at Fairfield House in 1918 that Godfrey Pilkington was born. The son of Colonel Guy Pilkington, one of the directors of the Pilkington company, Godfrey went on to become a director himself: albeit not in the glass industry! From 1953 until his death in 2007, Godfrey Pilkington was a director at Piccadilly Gallery in London and a devout art enthusiast, trading only the pieces he believed in. Godfrey was a trustee of St. Helens-based charity the Rainford Trust, set up to promote the arts in the local area, and gave his name to the Godfrey Pilkington Art Gallery in the Gamble Institute. His artistic leanings were instrumental in securing Antony Gormley and Anthony Green to sit on the judging panel for the St. Helens Open Art Competition, which he chaired.

Colonel Guy Pilkington made Fairfield House his home in the 1950s and 60s, lending his name to the building once it became a hospital, operated under the Guy Pilkington Memorial Home. It admitted its first patients in 1980.

It’s easy for the historic buildings around us to fade into the background on our daily commute or when out and about in the local area. But lurking just beyond the surface are examples of St. Helens’ rich heritage, just waiting to be rediscovered.