Whether you were a Northern Soulie, a casual shuffle dancer or an all-out raver, chances are you paid a visit to one of Chorley’s nightclubs back in the day. A good night on the town might even mean heading into Wigan to take advantage of a more raucous club scene. We’ve rounded up some of the best venues to bring back those hazy memories of booze, DJs and, er, dancing girls in the 70s, 80s and 90s, back when the drinking age was more of a suggestion than a rule.

This Chorley nightclub has really stood the test of time. First opened in 1988, Applejax spanned two floors and held plenty of secrets – most pressingly, what resided on the third floor. The club is known for playing chart topping hits, along with its blue exterior and sticky leather sofas.

AJs’ owner Kurt Smith passed away in 2016 and the club closed briefly two years later, but reopened in early 2019 after a £60,000 refurbishment.

Charnock Richard’s very own nightclub Park Hall was one of Chorley’s most popular night spots. Initially known simply as The Park, the club was home to resident DJ Phil Meredith who hosted its classic Joy nights. The club really came into its own in the 1990s, becoming an unmissable House venue with a massive capacity and modern sound system, making it a must-visit for clubbers across the Chorley district.

One of the club’s most popular shows ever was The Hitman & Her, which aired from 1988 to 1992, and among its regular dancers were Take That’s Jason Orange and 911’s Jimmy Constable. Peter Waterman and Michaela Strachan toured the UK’s best nightclubs with their musical extravaganza, beginning in Warrington and finally coming to a close in Manchester, though for many Chorley residents Park Hall’s show was one of the best.

When the nights wound down around 2am, revellers would head to the nearby Charnock Richard services for pick-ups, perhaps a little worse for wear but filled with memories of a night well spent. The club is now a Best Western hotel next to the now-abandoned Camelot Theme Park.

Under the UV lights of a building constructed almost entirely of wood boogied a throng of partygoers with various stains, spots and other suspicious fluids illuminated by blacklight. This was the Odd Spot, located on Knowley Brow. The shed-like building began its life in the 1960s and even had a pigeon coop built behind it!

Perhaps not surprisingly due to the amount of flammable materials used in its construction, the club burned down in the 70s. Its scorched remains were left on the site for several years until eventually housing was built in its place. 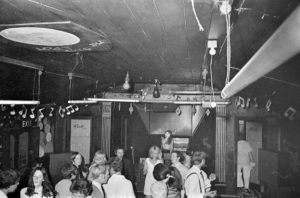 First opened in the late 70s, Wigan Pier Nightspot didn’t fully hit its stride until the 1990s, attracting around 800 clubbers every weekend. Featuring bright red pillars and curved leather couches, the spot was popular with revellers hankering for a drunken night out they’d forget by the next morning.

Wiganer Paul Gore remembers the music at the Pier Nightspot being briefly paused to premiere the music videos for Michael Jackson’s Thriller and Frankie Goes to Hollywood’s Two Tribes at midnight.

Visitor numbers unfortunately fell in the early 2000s, and Nightspot closed its doors for good in 2011. It was demolished in 2014 and redeveloped into a green space.

The greatest club in Wigan, or the world? Pemps was more than just a club – it was an institution. With formidable owner Barbara Calderbank’s discerning gaze turned to a mob of punters clamouring to enter, access to the ‘members only’ venue was highly coveted – and for some, impossible to acquire. Barbara took her mysterious entry criteria to the grave.

Formerly known as Puffers due to the proximity of the Puffing Billy steam trains occupying the nearby railway, the club eventually evolved into Pemps, a haven for Northern Soul lovers, punk rockers and pop fans alike. Classic playlists included Brass Construction, Fatback Band and Earth, Wind & Fire – even a bit of Bowie. The night would usually draw to a close with the romantic instrumental ‘A Touch of Velvet, a Sting of Brass’ when the bar closed at 2am.

Pemps was also a notorious haunt for Wigan RLFC players and club owner Maurice Lindsay, who could often be found holding court by the bar on Sunday nights after the match.

Pemps eventually closed for good in 2005 and was later demolished.

Wigan Casino opened its doors for the first time in 1973 in the former Empress Ballroom (affectionately known as ‘The Emp’) site. The venue was ruled by DJ duo Russ Winstanley and Ian Fishwick, who were known for their notorious record collection and US imports. DJs Kev Roberts and Richard Searling later joined the team.

The club was renowned for its Northern Soul all-nighters, which lasted until 8 in the morning. Nights – or early mornings – always ended the same way: with the 3 Before 8. Wigan Casino’s final three songs were Jimmy Radcliffe’s ‘Long After Tonight is Over’, ‘Time Will Pass You By’ by Tobi Legend, and ‘I’m on My Way’ by Dean Parrish.

Wigan Casino closed its doors for the final time in 1981, after 500 successful all-nighters. The last song ever to be played there was ‘Do I Love You (Indeed I Do)’ by Frank Wilson; a vinyl picked at random by Russ Winstanley to break the spell left by the usual 3 Before 8, which played three times consecutively at the end of the event.

The Casino building burned down a few months after its closure, and the site is now home to the Grand Arcade. The original DJs still host regular Northern Soul all-nighters for anyone missing the iconic atmosphere.

Popular on the jazz/funk scene, Cassinelli’s in Standish had a lot going for it – not in the least Kiss FM founder George Power’s tenure as resident DJ.

The venue opened as Cassinelli’s in early 1979, with DJs Colin Curtis, Billy Wildman and Barry Maleady stepping up to the decks. It ceased to operate as Cassinelli’s in the early 1980s before reopening as Mirage, based out of the Almond Brook Hotel, in the 90s. The building is now Standish’s Britannia Hotel.

Afterwards, stumble across the road to Henry Afrikas, a fun, tiki-themed bar with plenty going on. Whether you were cowering from Jason’s Horror Show with its snakes and coffins or ducking from the giant hands poking from the ceiling, you were always in for a good time over at Henry’s.

Maghull resident John Kelly remembers meeting his wife at Henry Afrikas: ‘I was on stage, having been called up to assist a 6ft DJ in drag, with a large snake round my neck, a black box on my head and a fire-eater setting fire to the box. Just a normal night out!’ 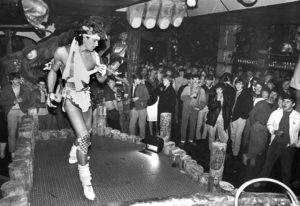 Reminiscing on the most iconic clubs of Chorley and Wigan is sure to bring a few drunken memories swimming back; back to a more innocent time, when venues were packed out by 10pm and closed by 2am! Sadly, many of Chorley’s classic venues have since closed, but something has to be said for their long-lived success even in the relative isolation of rural areas like Charnock Richard. And we can perhaps blame those sobering walks when you couldn’t get a taxi for a lack of violent crime that now seems all too prevalent. One thing’s for certain – things just aren’t like they were in the good ol’ days.