Chorley is full of hidden gems: picturesque parks, impressive former cotton mills and awe-inspiring historic buildings. Remodelled to suit the modern era, and often set back in expansive grounds, many of these buildings are easily missed by the untrained eye unless you’re a local – and that’s only the ones that have managed to evade demolition.

Euxton Hall Hospital is one such building, escaping a potentially uncertain future with its conversion into a hospital in 1981. Unlike some nearby sites, including Buckshaw Hall in Buckshaw Village and Winstanley Hall in Wigan which have fallen into disuse, the Hall has been redeveloped into a usable, modern space fit for the 21st century. But what of its heritage?

The first house on the Euxton estate is estimated to date back to the early 16th century, but it was the Anderton family who built the first incarnation of the building known as Euxton Hall today. The plot of land was purchased by Hugh Anderton in 1627, but, as a staunch Royalist during the English civil wars, Hugh was imprisoned at Lancaster Gaol and his estate confiscated and sold. When King Charles II marched from the north in 1651 Anderton was finally released and his property reinstated, though after the Royalists’ defeat at Worcester the estate was sequestered once more.

Hugh was succeeded by his son William, who wasn’t without his own strife; in 1689 William was imprisoned at Manchester because of his part in the Revolution. The Jacobite tradition did not die with William either – his own son was outlawed following the 1715 Rebellion. Eventually, however, Euxton Hall passed back into the Anderton line. In 1769 the original building was demolished and replaced, and updated again in 1850 by William Michael Ince Anderton, who added the Palladian West Front in a series of extensive renovations. The hall’s entrance, which previously faced west, but it was skilfully turned south, deemed by architects as ‘the best position’.

Also added was the chapel in 1866; designed by architect E.W. Pugin, the chapel is now a Grade-II listed building separate from Euxton Hall. The chapel’s stained glass window and encaustic floor tiles features the Anderton family coat of arms, with William Michael’s wife Lady Emma Anderton also depicted kneeling in prayer in exquisite detail in the glass. When Emma died she donated all of her jewellery to the Catholic church, with jewels set into a chalice which used to be brought out of a vault once a year to be put on show.

A bandstand used to reside to the left of where the car park is now – complete with intricately patterned Minton tiles and shaped benches. It was sadly demolished, leaving only the remnants of the tiling behind. 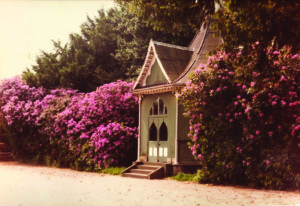 When William Michael died in 1884 he was succeeded by his son William Arthur, a soldier who spent very little time at the hall. Upon his retirement, however, he married and settled back down in Euxton. The last thirty years of his life were spent in residence at the hall, which went to his younger brother after his death as William Arthur had borne no children of his own.

In 1929 the upper storey was removed from the hall and it was converted into a bungalow-style building using the original stone floor of the landing on the second floor. In 1950 it was sold to Colonel Stanley Bell of Haigh Hall, a member of the Conservative Party and County Councillor. Along with his wife Lady Bell, Stanley transformed Euxton Hall into a cosy family home and restored the old chapel, which had fallen into disuse. Stanley died in 1972, leaving the hall to his daughter Margaret, who eventually sold it to become Euxton Hall Hospital in 1981.

Local Life’s very own Design Manager Mary Anne actually has ties to Euxton Hall. Her grandfather Harry Barlow was employed as Stanley Bell’s chauffeur, and lived in the Main Lodge at the estate entrance. In later life, Harry was employed as the hospital gardener, and lived on site until he passed away. Mary Anne’s mum Anne Tomaniak worked in catering at Euxton Hall Hospital throughout the 80s, 90s and 2000s, and has plenty of stories to tell.

Anne recalls an intricate tunnel system running underneath the hall. ‘One tunnel started in the cellar and headed up to Dower House on Dawbers Lane,’ she says. ‘Another was uncovered by my dad Harry and a surveyor while they were building an extension to the hospital – it headed towards Both Brook before dividing off into two branches, one of which led towards Euxton St. Mary’s Church. The tunnel was an escape route for priests during the Reformation.’

The cellar was home to an evacuated family during WWII, with a roaring fireplace to keep them warm during winter nights. Beyond it lies a bricked up room whose origin remains a mystery to this day; people have reported hearing babies crying from behind the wall and from the rooms above.

‘When Lady Bell was alive she was always ringing my dad up to come and look in the attic,’ Anne says. ‘She said she could hear people walking about. I’ve been up there and it still has some of the original rooms – the wallpaper was beautiful, with bluebirds on it.’

Those weren’t the only ghostly encounters people have experienced at Euxton Hall.

‘There was a patient there once who had been very ill,’ Anne continues. ‘When she woke one morning she was thanking the nurses, asking “who was that nurse who sat with me all night holding my hand?”. No-one had sat with her. My dad Harry always said it was Emma Anderton – she was a very caring person, still immortalised in the stained glass window of the chapel.’

Anne also met a clairvoyant who had been visiting a patient. ‘I took her downstairs to show her some of the rooms that made me feel uncomfortable,’ she tells me. ‘At the bottom of the cellar stairs there’s a wooden door, and beyond it, a staircase that goes nowhere. Judging by how worn the stone steps are, it has obviously been used when the Hall was a country house. She didn’t feel anything there, but when I took her to the tunnel, which had been locked up with a door, she stopped in her tracks and warned “I wouldn’t open that door.” It makes me shiver just thinking about it!’

Whether there’s any truth to the stories remains to be seen, but a house as old as Euxton Hall is bound to have its fair share of spooky tales!

With so much history hidden within its walls, Euxton Hall is so much more than just a hospital. Perhaps the next time you step through the doors you’ll think back to Emma Anderton’s caring nature or the priests scuttling underneath the building to escape persecution in the 16th century.