Recent controversies concerning public access to Haigh Hall have ruled local headlines over the past year. Has this meant that other historic buildings across Wigan going unnoticed as time and the elements come once again to claim them? One such building is Winstanley Hall; derelict since 2000. With groups like Save Winstanley Hall, Historic England and SAVE Britain’s Heritage getting behind the Hall’s restoration, one question remains: is it too late?

The building’s illustrious history speaks for itself. The Winstanley family, who had been lords of the manor since at least the mid-13th century, constructed the Hall in the mid-1560s. The 80-room mansion was only occupied by Edmund and Alice Winstanley for around 30 years, after which London goldsmith James Bankes purchased the property for £3,100 (around £900,000 in today’s money).

Made up of a main 3-storey manor house with a raised front entrance and symmetrical wings, plus a stable building, the Hall was altered in the 17th century, then again in the 18th century. During this remodel, the rear block was raised to match the full height of the house, the ground floor windows replaced, and a canted bay added to the left wing. Later, in 1811, celebrated architect Lewis Wyatt created a 4-storey tower and carried out alterations to the front entrance. The iconic Neptune fountain was finally added to the courtyard in 1830, commissioned by William Spence, a noted sculptor from Liverpool.

In 1855, tragedy befell the Hall in the form of a string of deaths. Estate manager Thomas Shortrede, who was in charge of the day-to-day running of Winstanley Hall, had allegedly been having an affair with a local mason’s wife, Mrs. Atherton. After news spread about the lovers, Shortrede’s wife was found drowned in the estate’s well; apparently a suicide. Further devastation came when Mrs. Atherton hanged herself, scarred from the scandal. In August that year, Thomas Shortrede was found dead in the Hall from a gunshot wound to the head – people speculated that he might have brought the gun onto the property to shoot rats and slipped while holding it; others claimed he felt guilty over the deaths of his wife and lover and shot himself on purpose.

During World War I, Winstanley Hall served as accommodation for wounded soldiers under the banner of the British Red Cross, with the permission of G.H. Bankes. Soldiers used the Hall and its grounds for training exercise, with the Royal Engineers and 6th Battalion of the Manchester Regiment staying over. In World War II it was home to the Women’s Auxiliary Air Force until a group of squatters moved in, comprised of around 20 local homeless families who lost their houses to the bombs.

Winstanley Hall remained in the Bankes family for nearly 400 years, until Tim Bankes sold it to Dorbcrest Homes in 2000. Though a planning application was submitted to turn the Hall into flats back in 2003, it was quickly withdrawn due to opposition, and now what was once a proud family home has sadly become a shadow of its former self. In 2015 a £170,000 supporting grant allowed urgent repairs to be made to the stable building, but progress since has been sluggish. 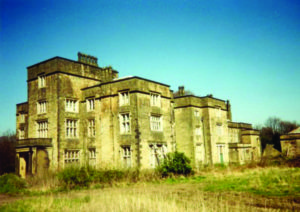 Surrounded by tangled weeds, the building’s ancient rural charm is still evident – but the grand exterior hides a decaying ruin suspended in time. The Grade-II* listed Hall is a Category A risk on the Historic England register; it is at immediate risk of further rapid deterioration. But there’s one Wigan group looking to change the Hall’s future for good.

Established in 2009 by Lee Hynes, the Save Winstanley Hall group has been campaigning to secure the Hall’s future for nearly eleven years. Now local resident Rob Stevenson is leading the charge.

‘I grew up in Highfield,’ Rob tells me, ‘so a lot of my childhood was spent playing in Winstanley Woods, which were part of the estate. This was really what inspired me to get involved in the campaign – I think it would be an absolute travesty if an area that could be used as a community space was lost.’

Rob has since been in contact with Dorbcrest Homes and Wigan Council, with the hopes of getting information from inspection reports and an options appraisal for the Hall, so he can evaluate the most sensible course of action.

‘Ideally, it would be great to set up a Trust to help repair the Hall. This could mean using some of the outbuildings for commercial purposes and some for community spaces – profits would go back into funding repairs,’ he explains. This could mean Wigan Council obtaining a compulsory purchase order for the Hall, with minimum compensation paid to its owners because of the state of the building and the extent of necessary repairs.

‘The local community is really missing a family area – a nice park to go for walks or for kids to play in, and the Hall is a great location for that,’ Rob adds. ‘I’d also love to see the gardens turned into community allotments for local schools to grow produce.’

Group founder Lee Hynes, meanwhile, would like to see the Hall transformed into a hotel or high-end restaurant. ‘In reality it’s more likely to become apartments,’ Lee says, ‘but anything will do as long as it does not fall down. To me the Hall represents the grandeur and importance of what Wigan once was.’

Winstanley Councillor Paul Kenny commented: ‘Winstanley Hall is very much a treasure that must be protected and retained. Its deterioration is a matter of deep concern for many people.

‘I appreciate that decisions on the future development of the site are difficult and that any scheme that comes forward must be financially viable. I also believe that a future planning application would prove to be extremely controversial given the Grade II* listing and may deliver objections from key stakeholders like Historic England. However, given the public interest I believe now is the time for Dorbcrest to set out its vision for the Hall in light of the options appraisal’.

The Council confirmed to Paul that no pre-application talks have been held since the options appraisal report was received by Dorbcrest.

A spokesperson for Dorbcrest Homes commented: ‘Since 2003 we have tried various resolution strategies and submitted schemes for planning permission to restore Winstanley Hall to no avail due to the complexities of the project and the considerable restrictions of the site.

‘The hall has suffered from severe dilapidation for over 60 years. We have spent considerable time and money on stabilising the courtyard and hall to limit deterioration and recently a new options appraisal has been completed in conjunction with Wigan MBC, Historic England and the wider land owner Tim Bankes. Within it a number of restoration options are tabled. The heritage deficit for these options still runs into tens of millions of pounds – we are still working on viable solutions and investigating our options further.’

With such an illustrious heritage in the Wigan borough, Winstanley Hall is undoubtedly an integral piece of local history, albeit one that has fallen out of the public eye. It would be a tragedy indeed if the years continue to go by without intervention – and a great loss to the surrounding community.

A Change.org petition started by Rob Stevenson is helping to boost awareness and engagement with the Hall’s future, which already has more than 1,700 signatures. You can sign it here: www.change.org/p/wigan-council-save-winstanley-hall

Thanks go to David Bancroft Photography for supplying aerial images.

Urban explorers such as Snake Oil UE and Proj3ct M4yh3m have documented the Hall’s current state in a series of photographs and blogs; Google if you’re interested in seeing some up-to-date images of the interior.