Let’s face it: vegan diets are on the rise. Since the conception of Veganuary in 2014, vegan restaurants and businesses have been springing up nationwide, with more people than ever ditching the meat and dairy to follow a completely plant-based lifestyle. The number of vegans in the UK has actually quadrupled since then, with an estimated 600,000 vegans in Britain alone.

Some quote health reasons for the radical diet change; others prize animal welfare above all else. But it’s the militant approach to veganism which remains a point of contention for most meat-eaters – from outspoken activists appearing on our morning television to the common trope of the vegan constantly letting you know about it. After all, how do you know someone is vegan? They tell you.

Fad diet or not, animals headed for slaughter doesn’t exactly make for easy dinnertime conversation. For some, like Wigan resident Sarah Vidler – member of Wigan’s Vegan Community and animal rights activist – veganism goes beyond a simple lifestyle change. Sarah, who has been vegan for four years, regularly attends vegan vigils organised by Wigan Animal Save; on the surface, a slightly bonkers practice which involves turning up to slaughterhouses to bid an emotional farewell to the animals before they’re taken off to be killed. This is a way to show pigs, cows, sheep and more some love in their final moments, with activists reaching through the bars of cattle vans to stroke their heads and whisper comforting words.

Of course, it all sounds slightly mad. After all, the animals are still headed off to the same place regardless, so what’s the point? Sarah thinks the sense of community built by meeting other activists and being able to share the animals’ stories with the world, in the hope of turning more people towards a more sustainable way of living.

‘I attended my first vigil two and a half years ago,’ she tells me. ‘I had no idea what to expect and was incredibly nervous – was I being extreme, going to stand outside a slaughterhouse on a drizzly Saturday morning in November? Were we going to get arrested?’

It turns out no, as long as protests remained peaceful, the group was perfectly entitled to attend, as long as they arranged things beforehand with the slaughterhouse. And the staff’s reaction?

‘Initially the staff were wary of us and sometimes mocked us for being there,’ Sarah continues. ‘However, over time they began to see that we weren’t a threat, and were simply there for the animals – that we wanted to show that they mattered. The staff also realised that we weren’t against them as individuals, just standing up against an industry we believe is unjust, unnecessary and contributing to the destruction of our environment. 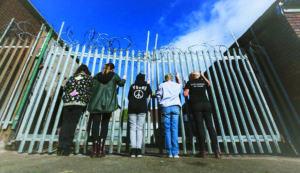 ‘It turned out to be an incredibly moving experience. I remember breaking down the first time I saw the slaughter truck pull through the gates to unload the pigs. That feeling of utter helplessness, not being able to save them – it was unbearable, yet I also felt incredibly inspired being surrounded by like-minded people, who were seeing what I was seeing and feeling what I was feeling.’

Sarah began attending vigils with Manchester Animal Save, who have an agreement with Tulip Meats in Ashton-under-Lyme to stop the vans for a few minutes to allow attendees to say goodbye. This evolved into helping to run the local Wigan group, who now have a similar agreement at Blacklidge Bros on Warrington Road. Sarah also helps to facilitate local ‘Cube of Truth’ events in Wigan town centre, which aim to highlight the truth behind what’s on your plate by showing footage of ‘animal exploitation’. She has plenty of horror stories to tell about slaughterhouses across the country – most of which are too graphic to be repeated here.

‘It doesn’t matter what labels we give these animals in life – whether free-range, organic or pasture-fed – not a single animal that I’ve witnessed has ever walked willingly to their death. And why should they?’ Sarah wonders.

What started off sounding like mob-mentality, tree-hugging lunacy actually begins to fathom itself into something that makes a strange amount of sense. After all, we wouldn’t want to see the animals we treasure as pets sent off to slaughter – why should cattle be any different?

‘To staunch meat eaters I would say come and talk to us,’ Sarah says. ‘We’re not the scary terrorists depicted in the media, we are ordinary, hard-working people just like you who want to build a better world for everyone. How can that be a bad thing?’

To find out more about upcoming vigils in Wigan, visit Wigan Animal Save on Facebook or head to www.thesavemovement.org