Abandoned hotels, lidos filled in with cement, boarding houses along the beach – perhaps not what you first think of when you cast your mind to the small town of Formby or its neighbour Ainsdale. But venture deep enough into the rich heritage of both areas and you just might find a few forgotten relics of a time gone by: the lost seaside settlements that would never be.

In the late nineteenth century plans were drawn up for the first of these doomed resorts: Formby-by-the-Sea. Formby Land & Building Co. purchased 105 acres of land in 1875 along the Ravenmeols coast, with the intention of building roads, parks, promenades and piers along the landscape in the hope of attracting visitors from far and wide.

Work began, with Victorian-style homes like Beach Lawn (at the junction of Albert and Alexandra Roads), Everton Valley House and Mount Pleasant springing up along the coastline to the South West of Formby. Another of these properties was Seabank House, which still stands today; the residence originated as two semi-detached houses, and began its life as Father Berry’s Children’s Home. The Home was established by a Liverpool charity to provide holidays for vulnerable boys who could experience a few days relaxing by the sea, part of a series of reforms by Father James Nugent in Liverpool. In his day, Nugent also helped provide refuge for homeless boys, mothers and babies, and female ex-convicts in the city. 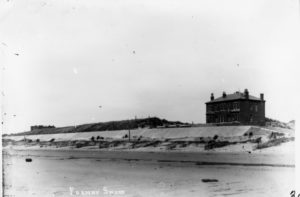 Everton Valley House, meanwhile, was similarly constructed in 1875, repurposed in 1914 as the Notre Dame Convent for Liverpool Catholic Girls’ Orphanage. It was later home to Formby resident Gladys Bevan, Formby Civic Society member and owner of a pet shop in Duke Street, but was demolished in the 1970s.

One of the grander buildings in Formby-by-the-Sea was the Stella Maris Hotel, a sea-facing building along Alexandra Road with a flat roof. The hotel never actually operated as such, but instead became, respectively, a convalescent home for priests, a café, a shop and finally a Radar Station during World War II. These stations utilised the revolutionary technology of radar to detect enemies, navigate after dark and aim anti-aircraft guns, playing a huge part in the war. Like many of its contemporaries, the Stella Maris was demolished in 1954 after being briefly inhabited by squatters.

Though few mementos of Formby’s past as a potential seaside haven exist, you can still find a few hints at its heritage. Buried within the marram grass of Formby’s many sand dunes are the remains of Formby Promenade; intended to be a double-tiered walkway for visitors sampling the sea air, all that remains are the remnants of the stone steps which would have led up to the main path. You can still find them at low tide if you search hard enough!

The next step for Formby Land & Building Co. was the construction of a light railway, running the length of the Promenade from Formby Station and along Andrew’s Lane. This was mainly used for the transportation of materials needed in the resort’s construction. The narrow-gauge track turned west into Crescent Avenue and looped around Firwood before heading through Alexandra Road and Albert Road. The Firwood house was home to local land owner Jonathan Formby, and after his death fell into disrepair. A new Firwood now stands in its place.

Two new roads were also partially constructed, including Lord Street behind the Promenade. This was the Formby Land & Building Co.’s limit, however, and construction dried up in 1902 despite their big plans for the resort, which included new parks, swimming pools, tramways, markets and aquariums.

The project was still being discussed by the council during the First World War, though it eventually fell by the wayside. Many factors contributed to the resort’s downfall, the first being that the main construction site was incredibly difficult to reach, and far away from material suppliers. Any boarding houses built there would have been isolated from the centre of Formby and would likely have struggled on their own. Housing developers such as those responsible for the Carr’s Crescent estate, on the other hand, had likely made enough money from the house sales to pull out of the project altogether.

And so Formby Land & Building Co.’s dissolution left no alternative: Formby-by-the-Sea would have to be abandoned. However, the final nail in the coffin was the outbreak of the Second World War which put a firm end to the scheme, with much of the property around Formby relinquished to the military for defence purposes.

Ainsdale, meanwhile, was discovering its own potential as a prime bathing spot for tourists. By 1903 plans had been announced by Charles Weld-Blundell of the Ince Blundell estate to begin its transformation. Inspired by the success of Southport, Blundell planned to create a ‘continuous esplanade from Southport, through Birkdale to the southern boundary of Ainsdale’, which would span across more than four miles.

And so the Ainsdale Sea, Land & Pier Company was formed and a promenade constructed by the beach which still exists in part today, close to Pontins Southport. Originally this was dotted with pleasure gardens and a few houses for visitors taking a stroll along the prom. Sea defences and a small boating lake were also erected for the upcoming resort, along with oyster beds. These were to be accompanied by a new harbour if the project took off, in the hopes of bringing the fishing industry to Ainsdale.

However, further ambitious plans Blundell had for Ainsdale were not so lucky; he intended to build a pier running out into the sea, to provide a landing spot for steamers running to other coastal spots like Blackpool, the Isle of Man and Llandudno. Preparations were made for the building of a marine park, and Blundell believed the esplanade would eventually stretch to Formby and Freshfield – but this vision never came to be.

By 1933 the plans had been very much forgotten, and the short promenade buried by sand. It was uncovered by workmen digging the foundation for Ainsdale’s brand new £30,500 lido – another attempt to draw visitors to the village. First known as Ainsdale Bathing Centre, the lido was taken over during WWII as a naval base which incorporated the nearby beach, renamed as HMS Queen Charlotte in 1941. It closed as a naval base five years later, and stood vacant until 1972 when Pontins renovated it for use as a beach café. 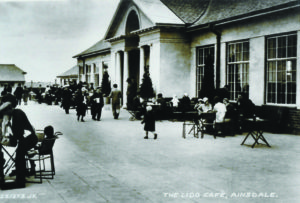 Later, the venue became Natterjack nightclub and finally the Lido Leisure Complex and Caravan Park. It was abandoned sometime in the 1980s before its demolition in 2007. In its 74 years of life, the lido never once contained a swimming pool!

Across the road, Ainsdale’s Toad Hall was likely built around the start of the twentieth century to provide accommodation for resort visitors. It served as a B&B in the 1920s and beyond, and was originally decorated with a pointed turret, giving it a castle-like feel, though the top has since been removed. In its later years, Toad Hall operated as a nightclub before falling into disrepair – now derelict, it’s a haven for urban explorers.

Ainsdale’s train stations played a major part in drawing the crowds at the start of the 20th century. The main station opened back in 1848, but a second station – named Seaside – was opened in 1901, renamed as Ainsdale Beach in 1912. This station eventually closed in 1952 after the resort’s gradual decline, and the line now forms part of the Coastal Road to Southport.

By the early twentieth century, both enterprises had been quietly deemed failures and laid to rest. All that remained were the shells of Victorian boarding houses and a few sand-covered fragments of a promenade left to time and the elements. And the resorts that never were? Mere memories of a bygone era.