Jess Phillips meets Londoner-turned-Wool Louie McCarthy-Scarsbrook at the kick-off of his testimonial year to get real about rugby, family, and life after Saints.

The prop forward, who began his rugby league career with Harlequins RL and went on to play for England, now resides among the ranks of the Saints elite after 10 years at the club. After a hectic few years balancing the arrival of twins with intensive rugby training, McCarthy-Scarsbrook is understandably looking forward to a testimonial year filled with celebrations – if not exactly rest and relaxation.

Louie grew up on the Isle of Dogs in London, and was in his last year of secondary school in Lewisham when a supply teacher announced he’d been picked to attend open trials hosted by London Broncos. ‘All the thick kids got selected to go down and take part,’ Louie laughs. ‘But I went down there and as it happens I got picked up by Phil Jones at Harlequins who ended up guiding me through my whole career.’

But, under the wings of seasoned players – and friends – Danny Orr and Rob Purdham at Harlequins, McCarthy-Scarsbrook’s rugby career blossomed, and he accepted a deal at Saints and played his first match for the team in 2011. After spending the majority of his life down south where he met wife Jessica, adjusting to life up north wasn’t all plain sailing for McCarthy-Scarsbrook. ‘I admit the accents took a bit of getting used to. I’m no good with them – of course, I’m used to it now because all my kids talk with a St. Helens accent!’

Pronunciation wasn’t the only curveball the town threw at him. ‘It shocked me how green everything was after being in the city for most of my life,’ Louie continued. ‘And how many animals there were. And everyone’s nice to you, too, obviously because I play rugby but there are plenty of random people willing to come up to you for a chat as well! I’m like that now; I often get told off by my brothers-in-law for speaking to people in the street when we’re out!’

Of course, there were still things he missed about his home city. ‘It was hard not being close to my family,’ he admits. ‘I also missed the bustle of London, because everything’s really quiet here, but for me family was my thing, the main thing.’

It was that same family support system that truly propelled McCarthy-Scarsbrook into a professional rugby career. With his wife Jessica behind him – and now with four kids in tow – Louie knew his dream was really within reach. ‘Jessica’s always been supportive of me; she’s been with me the whole time, and was all up for moving from London with me. She really has helped me through my whole career – without her, I doubt I would’ve stuck with rugby. She kept me sane throughout the whole thing; instead of being out partying all the time, she let me know if I really put my mind to a rugby career I could do it.’

And such dedication paid off – with McCarthy-Scarsbrook playing second-row, Saints sailed to victory at the 2014 Super League Grand Final against Wigan Warriors. He was also part of the squad during last year’s Grand Final against Salford Red Devils, both at Old Trafford.

‘The highlight of my sporting career was probably winning the two Grand Finals – that’s the job I moved up here to do,’ Louie tells me. ‘Which is great for a London lad who didn’t know rugby league! My first Grand Final in 2011 against Leeds was like a blur. It all just bypassed me so quickly. The second time in 2014 I knew I had to take it all in and chill out a bit, and we won. The noise and the atmosphere were just fantastic, and the emotion that came with it because it’d been so long since we won.

‘Last year was the same because we played so well throughout the year that to come away with the big one at the end was a class moment.’ 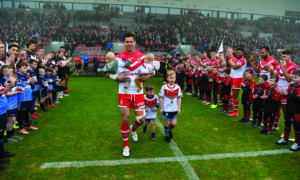 The fans’ response to Saints’ win was just as much a part of that atmosphere, Louie says. ‘Both home and away the fans are amazing. To go to Old Trafford with loads of them was just a great way to finish the season, and being at a stadium where they’re right on top of you ramped up the atmosphere. Along with Wembley, it’s definitely one of my favourite stadiums. St. James Park was a class stadium to play at, too, but I do like going to Wigan for the Derby.’

I wonder if Louie picked up on Saints’ close rivalry with Wigan straight away: ‘I did know about the rivalry going into it, yeah. I think as you play more games you get more into it – but I think they hate me a lot more than I hate them!’

To top it all off, Louie’s former Harlequins teammate and best mate Tony Clubb now plays prop for Warriors. ‘It’s great ‘cause now I can take the mick out of him as well, and we have our own private rivalry.’

This good-natured ribbing definitely dates back to Louie’s younger days. A notorious prankster through and through, he might have grown up a bit since then, but still fondly remembers clingfilming a fellow player to the roof of his car and driving around with him on top, with Clubb in tow. ‘There have been a couple of good pranks – we’ve taken the wheels off people’s cars and rolled them into the gym while we were practicing. I’ve done some silly stuff in my time, but I’ve grown up a bit now. I’m sure I do still annoy people though!’

It’s not all fun and games though. On top of juggling family duties with his sporting career, Louie’s also a qualified plumber. Frankly, I’m amazed he has any time to spare.

‘I was doing night school every Tuesday and Thursday at Warrington Collegiate. It took four years, but I’ve done it all and got it out of the way,’ he tells me. ‘So that’d probably be my plan after rugby, but plans change.’

But Louie’s not quite ready to pack in his sporting career just yet. 2020 has already kicked off in earnest, with Saints triumphing in their inaugural game of the year against Louie’s former team, London Broncos, scoring 36-6. Louie’s testimonial match raised £2,250 for Hull KR forward Mose Masoe, who recently suffered a serious spinal injury, forcing his retirement from rugby.

Coming up next is a Ladies Night in Burtonwood on Saturday, March 7; tickets cost £20. This will be followed by a black-tie dinner themed around ‘London Calling’ at the Totally Wicked Stadium on Saturday, March 21 – tickets cost £40 including a 3-course meal and entertainment. You can book tickets for either event by emailing louiems2020@gmail.com

For updates on Louie McCarthy-Scarsbrook’s testimonial year, keep an eye on his Facebook page @louiems14