Going to the cinema has been a favourite pastime for many since silent film premiered in front of an audience in 1895. The production was a Lumière brothers enterprise in Paris, and was the first to present moving pictures to a paying audience.

Now cinema is ruled by the multiplex, and the days of intervals and flickering projectors are long over save for a few historical mementos tucked away in bohemian backstreets. But St. Helens was once home to an eclectic bunch of picture houses – many of which have since been demolished. So dust off the lyrics to the ABC Minors song and look back on the glory days of film when it came to town.

The former Central Fitness gym on the corner of North Road and Duke Street has a long history – and it certainly didn’t start as a gymnasium.

Many will remember the old Capitol cinema as its stint as an ABC venue, where the legendary ABC Minors song was piped out by children the town over before the showing of a film for the young’uns, but the elegant building actually began its life in October 1929 as an independent venue.

The cinema was taken over by Regent Enterprises later that year before its lease was passed to the ABC chain in 1935. It held one screen with a seating capacity of 1,550, and underwent extensive renovation work in the 60s.
St. Helens residents have fond memories of watching Disney cartoons like Bambi and Snow White at the Capitol, as well as regular screenings of Kung Fu flicks.

The Capitol closed as a cinema in December 1978 and was converted into a sports centre. It still exists today, though the gym has since closed down.

St. Helens was actually home to not one but two ABC cinemas, the second of these being The Cannon on Bridge Street. From 1910-1934 the site was home to the original Savoy Picture House (also known as the Picturedome), before being demolished and replaced in 1935 by the ‘New’ Savoy.

The cinema hosted a café and 1,515 seats, along with balcony seating. It was taken over by the ABC in February 1936 and eventually became known as the ABC Savoy.

The cinema’s capacity was extended in 1978 and eventually became part of the Cannon group, and was renamed The Cannon to compensate for this. It continued to operate until September 1993, and was eventually demolished to make way for the Chinese Buffet and retail units that now exist on the site. 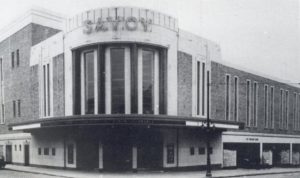 The Griffin family were widely known in St. Helens for their furniture store on the corner of Westfield Street and Ormskirk Street. But in 1912 the family built their very own electric theatre on Ormskirk Street.

The cinema was taken over in 1928 and became Scala Cinema, equipped with a British Talking Pictures sound system for playing talkies. It closed for business in 1956 and was subsequently demolished and replaced with retail units, now Iceland. The only reminder that the site ever contained a cinema is the Scala Snooker & Pool Centre which sits a floor above the shop.

On Corporation Street sat the regal Rivoli Cinema, which opened in September 1929. It was decked out with a Christie theatre organ to accompany showings of silent films and taken over by the JF Emery Circuit in 1932, then County Playhouses Wigan Ltd. The cinema boasted ‘courting seats’ in the back row for getting cosy on a date.

The cinema had one screen and could seat up to 1,257 people. In the 50s it was equipped with CinemaScope technology to allow for the showing of widescreen films, and the organ removed. Leeds-based chain Star Cinemas took over the lease in 1965 and converted the building into a bingo hall, before it was eventually closed and demolished.

Probably best known as the Savoy Club and later the Orange House pub, the white building on Duke Street opened in 1912 as The Oxford Picturedome. It could hold around 800 people in its single screen and played films like Calamity Jane – offering cheap Saturday matinees for children.

Before being equipped with a BTP sound system in 1930 – when it was renamed the Oxford Picture House – silent movies would be accompanied by live violin music. It closed as a cinema in 1956 and became the Plaza Theatre Club, offering live music.

The building became The Orange House bar before being converted into retail units.

The popular Hippodrome bingo hall began its life early in the twentieth century. It was originally opened as a theatre in 1903: The Empire Theatre of Varieties. The theatre contained two balconies, a range of stage boxes and could seat over 2,000 people. Local architect J.A. Baron designed the building, and it was operated by a group of businessmen including Thomas Barrasford.

Around 1937 the old theatre was converted into a cinema, reducing its seating capacity to 900 and getting rid of one of the balconies. It became known as The New Hippodrome Cinema and was equipped with CinemaScope in 1956, with the seating reduced to 700. The renovation work, which widened the proscenium to 43ft, retained the original Edwardian ceiling and central dome.

The cinema continued to be successful until 1968, when it was converted into a bingo hall.

Haydock was once home to two cinemas – the old Conservative Club on Clipsley Lane once housed the Haydock Electraceum, which was a pioneering picture house of its time. The ornate Electraceum, which in 1913 was showing silent movies like An Arabian Fanatic for a few coppers, was converted into a Conservative Club in 1920 and has since been demolished and replaced by Tesco.

But it’s the Haydock Picturedome that many Yickers still fondly remember. Better known as the ‘A’duck Bug’, many recall the tatty building and its frequent sprays from Ma Fenney, who doused the seats and audience in perfume – perhaps to get rid of any lurking infestations.

The Picturedome originally opened in 1920 and was run by the Bracegirdle family.

Close to the town centre on Boundary Road, the Palladium Cinema began its life around 1927, boasting a small stage and 25ft wide proscenium. Affectionately named The Plad, the cinema hosted many a Saturday matinee, showing films like Flash Gordon and The Three Stooges. During the interval, patrons would be doused with a scent spray to keep everyone feeling fresh during the film.

CinemaScope technology was installed at The Palladium in 1955, though the cinema closed shortly after in the 1960s. The building was in use as Casey Bros electrical wholesalers, but now stands empty.