For children considering future career paths, you’d generally expect answers of ‘athlete, ‘soldier’ or ‘teacher’. ‘Hangman’ would be pretty far down the list – but that’s exactly what a young Albert Pierrepoint – who would later be known as ‘the Southport Hangman’ – announced he would become when asked at school. In his long career as a hangman, Pierrepoint would go on to execute one of Wigan’s most notorious killers: Norman William Green.

Both Albert’s father Henry and Uncle Thomas were official executioners in the early twentieth century; Albert cited the ‘steady hands’ that ran in the family as his reason for following in their footsteps.

Henry Pierrepoint was an alcoholic, removed from the list of executioners in 1910 after turning up to a prison drunk the day before a hanging was scheduled to take place. In 1917 Henry’s health declined, leaving him unable to work and forcing young Albert to learn a trade as a learner tuber at Marlborough Mills.

Henry began to train Albert in conducting executions using rope and sacks of corn, as he’d trained his own younger brother Thomas. Albert’s own career in executions began in 1931, training for four days at Pentonville Prison in London with a dummy. He became assistant executioner by 1932 and assisted in his first execution in Dublin that December, under the instruction of his Uncle Tom. 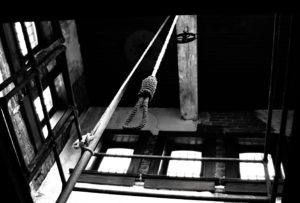 Albert was promoted to Head Executioner in 1941, and became renowned for his accuracy when conducting a hanging. Ahead of the execution he’d evaluate the prisoner’s build through a Judas Hole – a one-way peephole – in the condemned cell, before testing the equipment in the execution chamber next door. Prisoners were taken to the yard or to the chapel so they didn’t have to hear the practice runs taking place, a dignity Pierrepoint was adamant they receive.

The length of each drop was calculated using the Home Office Table of Drops, allowing Pierrepoint to achieve a near-perfect Hangman’s Fracture every time. He recorded these calculations in a diary that was auctioned off along with a plaster cast of his face and hands in June this year. The collection sold for £20,000.

Following the Second World War, Pierrepoint was responsible for hanging numerous war criminals including the notorious concentration camp commandant Josef Kramer – known as ‘The Beast of Belsen’ – and Irma Grese, the ‘Hyena of Auschwitz’. Infamous for her brutal treatment of female prisoners at Auschwitz, Grese would allegedly select only the most beautiful women to go to the gas chamber out of jealousy. It was also said that she had gruesome lampshades made from prisoners’ skin in her quarters. 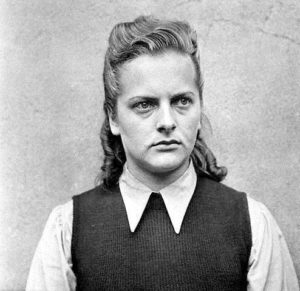 Among Pierrepoint’s later hangings was Wigan man Norman William Green, known for stabbing two young boys to death. The first victim was William Harmer, found in a field off Miry Lane in 1954 by a passer-by. Harmer later died in hospital from the eleven stab wounds Green inflicted.

On that same night seven year old William Mitchell was also stabbed by a man fitting Green’s description, but two men came to his rescue and chased the attacker away. Not so lucky was ten year old Norman Yates, who Green attacked a year later in Back Hope Street, Ince. Yates died from his injuries.

Green pleaded insanity in court but was convicted after confessing to the murder of the two boys. He was hanged by Pierrepoint in July 1955 at Walton Jail in Liverpool.
The last woman to be hanged in Britain also met her end at Pierrepoint’s noose. In London, former model and club manager Ruth Ellis shot her ex-lover David Blakeley five times. Despite her solicitor appealing to the Home Secretary, Ellis declared she wanted no part in appeal proceedings and regardless, was told she would not be reprieved. Her execution was carried out in 12 seconds.

One of the most famous – and most controversial – cases in Pierrepoint’s execution history was the Rillington case. 25-year-old Timothy Evans was said to have the mental age of a 10-year-old when he first confessed to the murder of his wife and daughter at number 10, Rillington Place in Notting Hill, and then later protested his innocence. After Evans was hanged by Pierrepoint, it transpired that his landlord John Christie was responsible for the murders of several women in the area and had hidden their bodies in the house. Evans was later posthumously pardoned. Both a film and TV miniseries about the case were released, in 1971 and 2016 respectively.

Pierrepoint resigned from the list of executioners in February 1956 and retired to Preston New Road in Southport. Locals describe him as a friendly man, often passing out sweets to Southport children and never short of a smile. For a time he was also landlord of the Rose & Crown pub in Much Hoole.

In total, ‘the Southport Hangman’ executed between 400 and 600 people in his career as a hangman. Despite this, his friends described him as a far cry from the sombre executioner figure; rather, they described him as ‘very jovial’ – the ‘life and soul of the party’.

One of these friends was a regular at Pierrepoint’s first pub, Help The Poor Struggler in Oldham. The duo would perform duets together and nicknamed one another ‘Tish’ and ‘Tosh’. Corbitt strangled his mistress Eliza Woods in 1950 and scribbled the word ‘whore’ on her forehead; Pierrepoint was tasked with executing his friend when he pleaded guilty at his trial in Liverpool. In the death cell, Corbitt and Pierrepoint exchanged their usual greeting, and when leading him to the gallows, Albert said kindly, ‘Come on Tish, old chap’.

Of the incident, Pierrepoint wrote in his 1974 autobiography, ‘[Tish] was not only aware of the rope, he had the man who handled it beside him singing a duet. The deterrent did not work.’

It was perhaps the hanging of his friend that began to shift Pierrepoint’s view on capital punishment. He declared: ‘I now sincerely hope that no man is ever called upon to carry out another execution in my country […] All the men and women whom I have faced at that final moment convince me that in what I have done I have not prevented a single murder.’

Albert Pierrepoint died in 1992, aged 87, at Melvin Care Home in Westbourne Road, Birkdale. His death was registered in Liverpool, though his burial place remains undisclosed.