Lytham is a picturesque seaside town steeped in history, from its iconic windmill to the beautifully ornate train station (FY8 4TQ). It is here we begin our 3.15 mile wheelchair accessible walk – and why not save the environment (and the petrol!) and travel via public transport?

When you leave the station, turn left and up the steps to the main road. If you’re in a wheelchair or mobility scooter, there’s an option to follow the road around instead, and head left over the railway bridge at the top. The first stop on our walk is Lytham Hall – hidden away behind the town centre, this historical gem can be found by heading through the gates and entering the park, following the drive around to the Hall.

The Grade-I listed country manor dates back to the eighteenth century, and was called home by the Clifton family. In its long and lustrous career as a family property, the Hall also served as a military hospital during the First World War before falling into neglect in the early twentieth century. It has since undergone huge restoration efforts, and offers regular guided tours – see the Lytham Hall website for more information. 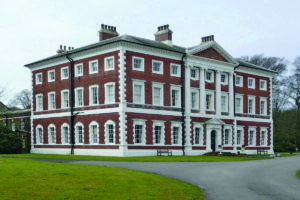 The Hall also boasts a cosy tea-room and plant shop, with public toilets off to the right. This was a great spot for a delicious bite to eat after the train journey – after refuelling, head out behind the hall past the disabled parking area and down the track to the left.

To the left of the path you’ll find Lytham Mound, which would have acted as a great lookout to see the ocean before the trees grew higher than its sightline – have a climb if you’re feeling brave!

The road here eventually emerges on Forest Drive – cross over, go left and immediately right to the cut-through into Maplewood Close. Cross the road again and turn right, then immediately left into Ringwood Close. Follow this through until you come to the first left – this brings you to the path over the railway and onto Church Drive. Left again, and follow the drive out onto Church Road this time, then a final left where you’ll eventually pass St. Cuthbert’s and the Victory Hall.

You’ll be able to see Lowther Park from this spot, with its ornate arches welcoming you onto the main path. This is a great spot to take a breather in no matter the weather – with a children’s play area, a café and a beautiful fountain, you’ll be glad you did. Don’t miss the huge cobble clock set into the vibrant flowerbed on the left either – the timepiece was gifted to the people of Lytham to celebrate the park’s centenary.

Now head from the north-west corner of the park to the south-east, emerging on the main road. There’s a zebra crossing which takes you straight out onto the promenade – heading left delivers you to Lytham’s famous windmill. 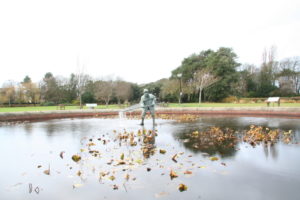 Originating in 1805, the windmill has had a turbulent past. In 1919 it was ravaged by fire, which left the interior gutted and derelict for two years, when it was handed over to the council. It underwent restoration work in 1989 and is now open to the public as a free entry museum, with local milling and lifeboat history available to view. It certainly cuts an amazing sight with its sails blazing in the winter sunlight. Visiting hours are seasonal – for details of opening times, see the Lytham Windmill website.

The promenade also used to be home to Lytham’s very own pier, which existed in the town from 1865 until it was badly damaged by a storm in 1903. A fire in 1928 only worsened the damage to the pier’s pavilion, which never reopened, and the pier itself finally closed just before the Second World War, eventually being demolished in 1960. Now the closest pier is down the road some in Lytham St. Anne’s – best experienced in the summer months, when the nearby paddling pool opens.

After taking in the views of the estuary and the windmill, head to the main road and cross, up to Station Road. Taking another left brings you out onto Clifton Street, which is the ideal spot for a bit of retail therapy on Lytham’s thriving high street. Continue along Clifton Street into Market Place before crossing and heading down to Hastings Place.

Follow the road round until you come to the railway station at the far end of the road. Now home to the Station Bar & Grill, the refurbished station is the perfect place for a late lunch or early tea before you catch the train home.

You can download our map of the walk HERE.